U.S. Supreme Court Justice Sandra Day O’Connor (Ret.) was nominated to be the first woman on the country’s highest court by President Ronald Reagan. She served from Sept. 25, 1981, until her retirement on Jan. 31, 2006, and during that time was often a crucial deciding vote in 5-4 decisions on some of the most controversial issues of our time. She is described as a moderate conservative who takes a pragmatic view of jurisprudence.

Justice O’Connor was born in El Paso, Texas, on March 26, 1930, and has long ties to Arizona, spending much of her childhood on the Lazy-B, a cattle ranch along the Arizona and New Mexico border near Duncan. She received her B.A. and LL.B. from Stanford University, but could not find a law firm willing to hire a woman when she graduated, and began her career volunteering in the County Attorney’s Office in San Mateo County, Calif., where she eventually became Deputy County Attorney. She married John Jay O’Connor III in 1952 and has three sons - Scott, Brian, and Jay. She returned to Arizona in 1957, and opened a practice in Maryvale, served as Assistant Attorney General of Arizona, in the Arizona State Senate, as a Judge in the Maricopa County Superior Court and on the Arizona Court of Appeals.

Patricia White, Dean of the College of Law at that time said: The Sandra Day O'Connor College of Law will mirror its namesake's groundbreaking persona to approach legal education in a different way, and teach tomorrow's attorneys to deal with urgent problems such as global warming, mounting threats to human rights, and terrorism. We intend to use Justice O'Connor as a model, to break the mold, and to move forward with great success.

Sandra Day O'Connor said: This law school is poised to become an extremely important part of the state of Arizona, and you can help by being involved in public service, clinical programs, helping people.

She challenged the students to make her and themselves proud. 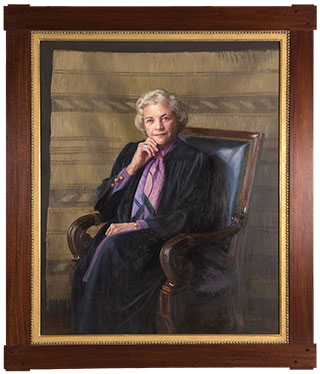 Society as a whole benefits immeasurably from a climate in which all persons, regardless of race or gender, may have the opportunity to earn respect, responsibility, advancement, and remuneration based on ability.